Class Diagrammer is a JavaFX desktop application for creating UML class and package diagrams from Java JAR files. Class Diagrammer is © 2010–2018 by Christoph Nahr but available for free download under the MIT license. Aside from my own code, Class Diagrammer also includes David Gilbert’s libraries FXGraphics2D, JFreeSVG, and OrsonPDF.

Class Diagrammer specializes in so-called “reverse engineering” of Java applications into UML diagrams for documentation purposes. That is, all diagram elements are created by reflecting over the type information found in compiled JAR files. See SampleProject.pdf for some example output.

Class Diagrammer projects only store references to JVM names and minimal layout data. The diagram contents are always recreated from the current type information found in the referenced JAR files. The idea is to run your project through the console executable whenever your code changes, e.g. from your build script. With no additional effort on your part, your diagrams are always up-to-date.

The download packages include a sample project with three diagrams based on Class Diagrammer itself. See SampleProject.pdf (606 KB) for this project’s output. Below is a PNG rendering of the third diagram, showing the classes that define UML relations: 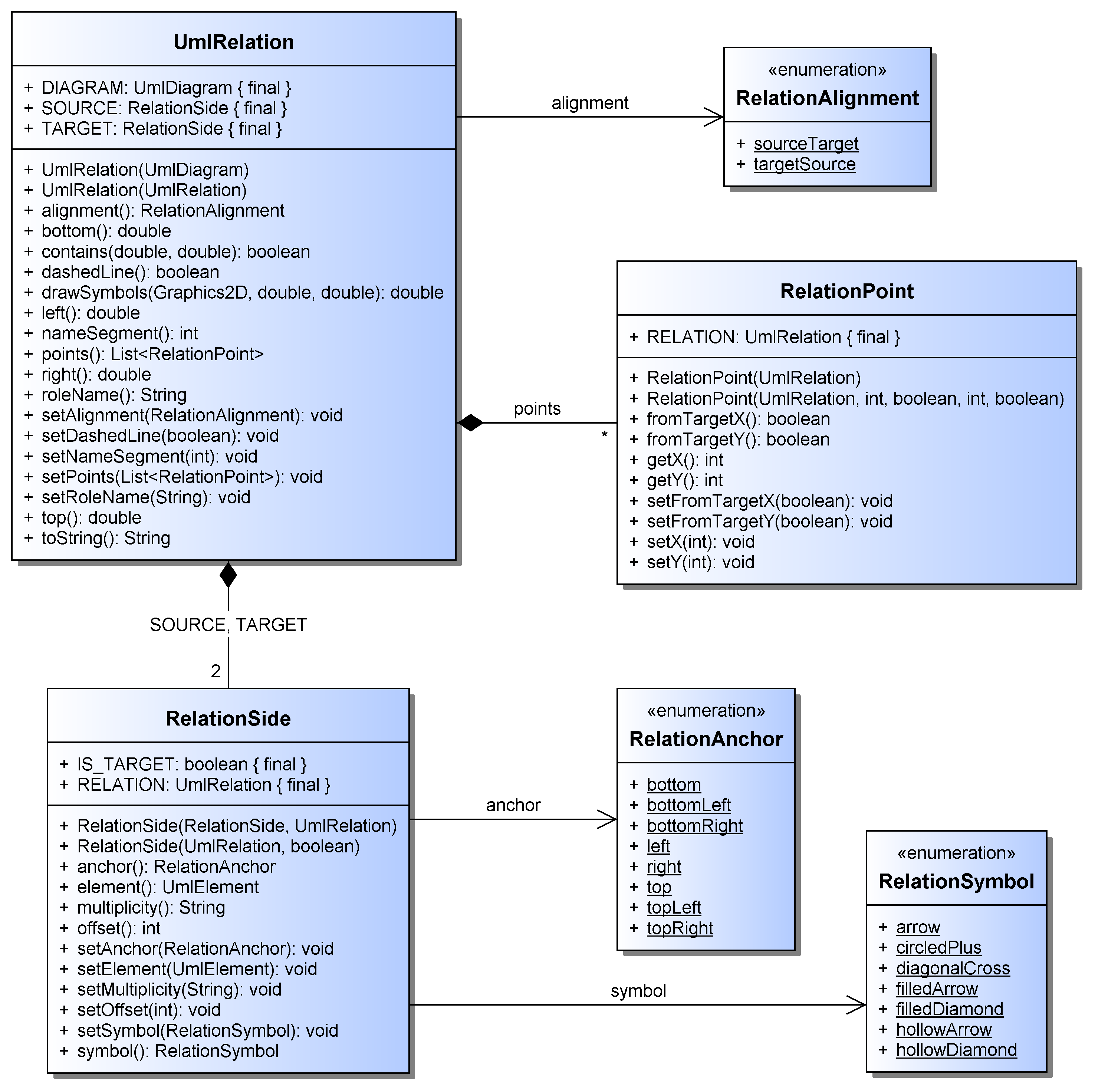 The sample project uses the default font, Arial. For more examples of Class Diagrammer in action, see the overview diagram for MIME Browser, and the embedded diagrams in the documentation for Star Chess and Tektosyne. Both of these projects use a custom font, Adobe Myriad Pro.

Class Diagrammer relies exclusively on the official Java reflection API to analyze JAR files. It does not use private APIs nor attempt to read JVM byte code directly. I found several free Java diagramming tools that are unusable today because their analysis engines predate the Java SE 5 reflection API, and so resort to low-level tricks that are incompatible with modern Java editions. No such incompatibility should ever happen with Class Diagrammer.

Copies of the ReadMe & WhatsNew files are included with both download packages. The integrated help system describes basic concepts as well as usage details.

Important — JavaFX is no longer included in Java SE 11 or later, so Class Diagrammer won’t work there. I am currently rewriting all my JavaFX application to use AWT/Swing instead which is still included. See here for more information.

Class Diagrammer requires no installation. Simply extract the contents to any directory of your liking, then study the enclosed ReadMe file for further instructions.