The Galactopedia is a utility program for Stardock’s space strategy game Galactic Civilizations II: Dread Lords, providing you with exhaustive information on all objects and technologies defined by the game. The information is taken directly from the game’s data files, and therefore always up-to-date.

The Galactopedia is © 2006 by Christoph Nahr but available for free download under the MIT license. Galactic Civilizations II: Dread Lords is © 2006 by Stardock Corporation.

The Galactopedia requires a Microsoft Windows system capable of running the Microsoft .NET Framework 2.0. This includes most Windows systems with Internet Explorer 5.01 or later, except for the unsupported Windows 95 and NT 3.x/4.0.

Windows Vista comes with .NET 2.0 preinstalled. Users of older Windows versions should use the Windows Update service or visit the .NET Framework home page to acquire the .NET Framework as a free 22.4 MB download, and to learn more about .NET system requirements.

ReadMe and WhatsNew files, as well as a brief online help, are included with the download package. As a sample of the Galactopedia in action, here’s a screenshot of the Galactic Resort entry: 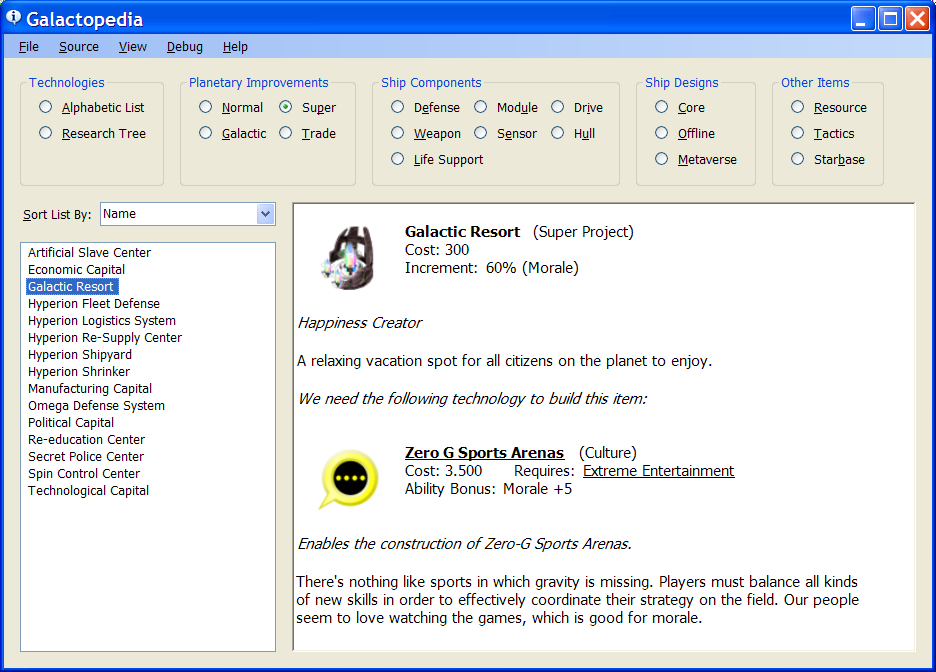 Binary Package — Since the current Galactopedia version is obsolete, I no longer offer a binary package for download. Please use Netriak’s version or update the source package yourself.

Created from XML source code comments using the free NDoc help compiler. To view the class reference, you need Microsoft’s HTML Help Viewer (which should be present on most systems).

The class reference was generated with an alpha version of NDoc 2.0, so there may be errors. Specifically, if you find that the links to the MSDN Library are not working you should select the pseudo-topic “SDK Link Manager” from the Index and enter the actual root of your MSDN Library topics.